Of March food is "Habutae potatoes". In Steamed using fish paste, it is like Hampen(halves). Tongue touch is smooth and there is a gloss pure white as silk.
This will in soup served with ingredients and bluish and mouthpiece.
Again and again often used is given, kudzu beating of clam, duck and quail, and so wound shrimp. The blueness aster and bracken, such as leaves of the butterbur boiled in the mouthpiece will fit.
Habutae potatoes is eaten at this time in most of the restaurant outlets, are served with ingredients and bluish, food in the potatoes, its shops feature in texture and shape will not appear well. Try compared eat. 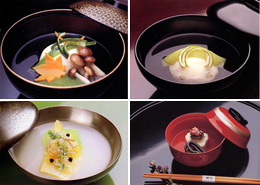 April of bowl species is tilefish. Tilefish is the famous "Okitsu sea bream" that caught in Suruga Bay. To fish that are very similar in tilefish the same kind, there are Guji and Shirogawa. Form is similar, respectively, but the color is slightly different. Tilefish is red in the same way as red snapper, Guji is thin pink, Shirogawa is white color. tilefish color is also a vivid, taste is also delicate.
Bowl instrument will be used many patterns of cherry blossoms. Bowl of tilefish that pattern of cherry blossoms is issued in the drawn bowl. I think that only you are able to enjoy the well-spring of this dish.
※ In addition, bowl lacquered requires careful handling. After you have finished eating, because there is scratched in lacquerware and upside down overlapping the bowl with a lid, is manners to the lid as issued.

Whole body is thin, has a silver as a needle. "Halfbeak thin and slender." And as write is Hakushu Kitahara of the poet, is elegant and delicate lady of the sea.
Body length is about 35 centimeters, but the lower jaw has about 5 centimeters. In the lower jaw I will not eat the plankton that are on the surface of the water.
Halfbeak the same species than the flying fish, it will pop out from the surface of the water as if chased by the enemy flying fish. Body is white, delicate as transparent. 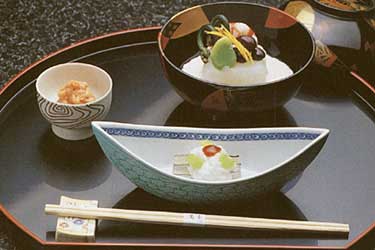 Since the juicy fish, and the sashimi and sushi and lightly kelp tighten. Black streaks slightly visible in the transparent body is the color of the abdominal cavity mucous membrane. From this color, as though trying to find the shortcomings of beauty is also said to "halfbeak is beautiful but the black belly" abuse and the like. Shun is the spring and autumn of twice. Crisp shape and bland is has been favored in the spring of the table.

Charm of Japanese cuisine, faster than the outside of the window, is the season to visit on a tabletop.
It is washed off wild is, by changing the figure to the sophisticated rustic, us to us to tell the season. Nanohana also such spring charm representative.
Bright green and yellow, plays the color of this season only. The rape blossoms came to be treated as a food is the past 50 years. And picked the time the swollen bud is slightly, or to field mustard pickles, or served in the cooked food and boiled, and or mixed with mustard and soy sauce. Originally because the flowers that have been grown for cut flowers, is a beautiful figure even boiled even pickled.
Since the short period of time only not line up on the table, please enjoy the spring of the color enough before eating. 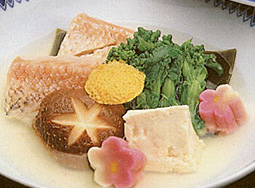 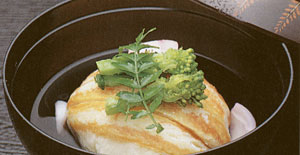 The bud is the young leaves of Japanese pepper. Since the well-equipped form and dark green, rather than to the Japanese cuisine has been a favorite as shall not.
Since deciduous shrub of the citrus family, is the spring of the evidence of this young leaves is born.
It is also often lined up on the table and played with rape blossoms, it is the presence must be in the spring. Japanese pepper are flowers and fruit used as a Japanese spice, but shoots buds also firmly with color, shape, fragrance. Only hit across with both hands, will soar to vivid refreshing scent. If you want to put out an even stronger aroma, let's hit in the back of the kitchen knife. 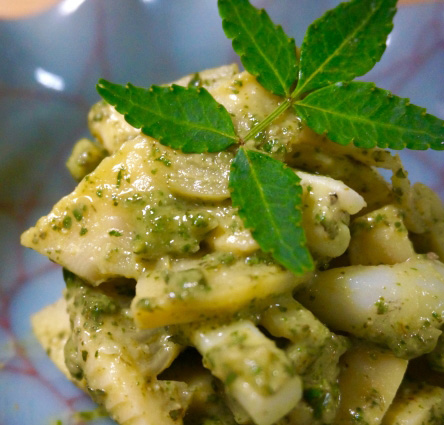 If you only want a stronger smell, rubbed put in mortar, please eat only the color and aroma mixed with dengaku miso. You can see affixed such as sashimi year-round, but spring If you enjoy the smell of real pepper is the best.

I heard that Japanese people eat bamboo, Westerners would have been very surprised. Bamboo is a degree to which the bits and pieces To volunteer per Provence in the south of France, they are the not familiar with bamboo. But bamboo shoots is not just one of the delicious food for the Japanese, it is also a happy mark usher in the spring.
Representative of bamboo shoots in Japan, a "Madake", "Hachiku","Mousouchiku", is bamboo. Harvest season in June, May, April. Both are imported from China, a Madake and Hachiku is compared to having a higher old history to appear in "Kokin Wakashū", Mousouchiku is a newcomer. 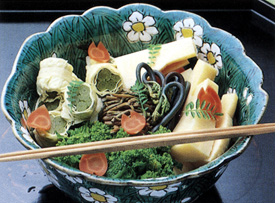 However, bamboo landed in Kagoshima in 1763 has been said to be the original. But it has spread from there across the country, because the soil of clay in the vicinity of Nagaokakyo Kyoto is adapted to the cultivation of bamboo shoots, and there is a highest quality bamboo shoots of origin in Japan.
"Sashimi of bamboo shoots the best is," There are people who say that, but it is actually not very delicious. Certainly it tastes like raw chestnut, but the action is strong, and placed in the mouth, you have tongue numbness. Bamboo shoots is the most delicious cuisine method boiled included but, bamboo shoots rice is also delicious to put a bland bamboo shoots and the chemistry is good fried.
Bamboo shoots is written as "筍" or "荀". Both enter the character called "旬(means season)" it will be said to represent well the essence of bamboo shoots that carry a sense of the season in Japanese.

This bivalve came to be known as the "clam" is the shape and color of the shell is similar to the chestnut, because I referred to as the "beach of the chestnut" to the mountain of chestnut. In addition to the chestnut in the sense of the stone, stone There is also a theory that because it seems there is in the ground.
Clam of Kuwana is, look and there is a color and gloss worthy of the old call it the "beach of the chestnut". Shell is thick, body is large, it has been pleased with the "It's a rarity," the foodie our country. 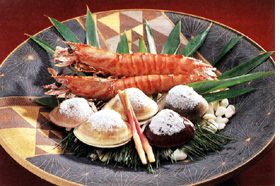 Clams, best quality is what is caught in the confluence of fresh water and salt water, the famous Kuwana as "baked clams of Kuwana" meets this condition. Kuwana City, have joined the three major rivers of Ibi, Nagara, Kiso, located on the estuary where seawater and freshwater of Ise Bay each other intermingle moderately. The estuary area, you 5 meters water depth is less than the sea has created 30 kilometers More, a suitable location for the habitat of the clam.
And history is quite old and baked clams, already was known to the people as famous in the Edo era. Hiroshige Ando of ukiyoe designer also to "Hiroshige diary" was painted, such as the following passage comes in. "In looking forward to the evening drink in the specialty baked clams, finally we arrived in Kuwana. Trying to relish and immediately sat in the teahouse. it's amazing (Tempo first year in August)."
Those days had been caught a lot of clams, in the teahouse of the beach highway, baked in the leaves of pine that has fallen on the sandy beach, it was sold to travelers. In this way, you can also enjoy the pine scent of along with the flavor of the clam. Pine and clams are a good match for a long time, clams and had been told that there is no worry of addiction if burn the leaves of pine. In addition, when a pine tree was nearing withered and senility, either root to fill the shells of clams, and put the boiled juice, we talk also been told that the trees come back to life to be strange.
Since the leaves of pine is soft and thermal heat is transferred to the average, at the time it was used as a fuel, such as when you cook a stew or tea. Modern, in the general home, but you can not use quite the leaves of pine, there is a trick to burn well a clam. In Funatsuya, you first cut the hinge of the clam. In this way, even if baked without having to open the shell of the lid, you delicious juice from escaping. When applied to the fire, scallops puts to face down.
And baked slowly in the "charcoal". Clam that has been burned from the bottom, sticking to the shell on for hot, you accumulate juice under the shell. Eat as it is placed in a dish. Seasonings without, please enjoy the taste of the shellfish itself.

Taste the bitterness of wild plants

Edible wild plants knob for a limited time, which also serves as the play of the spring, from March to April is the season. Unlike the cultivated vegetables, wild grass and wild plants in the spring of taste is the food that life force that sprout by dividing the earth has been lodged.
Butterbur sprout, Seri, shepherd's purse, aster, mugwort, dandelion, horsetail, extending, field liver, mountain Udo, wolfberry, Acanthopanax, red beans vegetables, Kogomi, bracken, mainspring, Hosta, Urui, bud of cod, Japanese knotweed, and Oke is, bitterness and aroma to wild plants native to the hills, such as bamboo shoots, there is action, there is a unique flavor. 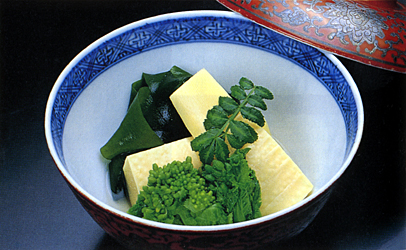 Both the action Without suitable for each, and cuisine from the exposed well in water. Butterbur sprout if boiled, butterbur miso, miso, Nibitashi, boiled included, tempura, fruit juice, and mix rice, such as rice with green tea.
In general, wild grasses and wild plants are used boiled, vinegared, marinated, boiled, such as tempura. Spring dish is why it is said to eat the bitter taste.